This article is co-authored by Dorthe Bomholdt Ravnsbæk and describes a very important aspect of strain in the performance of olivine cathode materials. 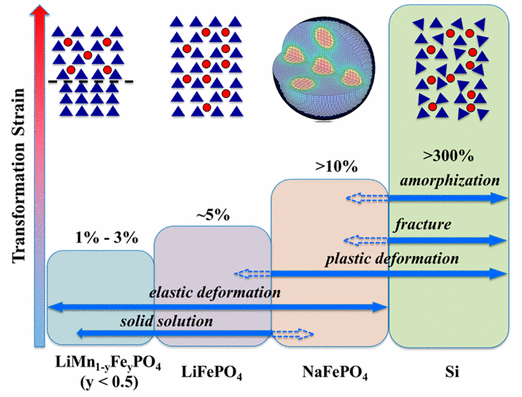 Virtually all intercalation compounds exhibit significant changes in unit cell volume as the working ion concentration varies. NaxFePO4 (0 < x < 1, NFP) olivine, of interest as a cathode for sodium-ion batteries, is a model for topotactic, high-strain systems as it exhibits one of the largest discontinuous volume changes (∼17% by volume) during its first-order transition between two otherwise isostructural phases. Using synchrotron radiation powder X-ray diffraction (PXD) and pair distribution function (PDF) analysis, we discover a new strain-accommodation mechanism wherein a third, amorphous phase forms to buffer the large lattice mismatch between primary phases. The amorphous phase has short-range order over ∼1nm domains that is characterized by a and b parameters matching one crystalline end-member phase and a c parameter matching the other, but is not detectable by powder diffraction alone. We suggest that this strain-accommodation mechanism may generally apply to systems with large transformation strains.

Permanent link to this article: http://batteriselskab.dk/artikel/videnskabelig/accommodating-high-transformation-strains-in-battery-electrodes-via-the-formation-of-nanoscale-intermediate-phases.htm