…”one of the Top 5 projects in the EU Horizon 2020 initiative, a program with a total budget of 21 million euros, this initiative is part of the Danish Natura project, which guarantees local people green transportation in these areas.”

Leclanché is a joint partner in the Green Ferry Project and will deliver a full-electric drive train to the ferry with its partner Visedo. The ferry will be equipped with a 4.2 MWh battery system from Leclanché, making the boat the world’s largest ferry in terms of battery capacity. As one of the Top 5 projects in the EU Horizon 2020 initiative, a program with a total budget of €21 million (US$24 million), this initiative is part of the Danish Natura project. 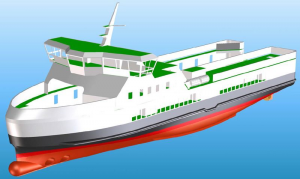 The ferry will achieve superior efficiency due to an optimized weight and hull shape and the electric propulsion equipment. CO2 emissions will be reduced by 2000 tons and NOx by 41.5 tons per year compared with an existing diesel ferry. The silent electric motors will also reduce emitted noise level and the new vessel will reduce wake waves right behind the ferry by 60-70% which allows navigation in the shallow Danish Natura areas. Charging power of up to 4 MW allows short port stays and efficient operation.

Permanent link to this article: http://batteriselskab.dk/nyheder/worlds-largest-electric-ferry-to-be-equipped-with-massive-4-2-mwh-lithium-ion-battery.htm