Sodium-ion firms get cash boost to bring technology to market 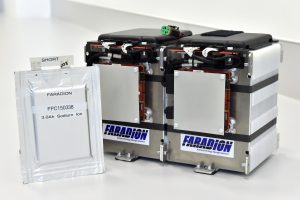 The sodium-ion batteries which power the world’s first sodium-ion vehicle, developed by Faradion in conjunction with Williams Advanced Engineering and the University of Oxford, part funded by Innovate UK.
Photo: Professional Images/@ProfImages

A UK based project to develop sodium-ion batteries for the next generation of electric vehicles has received a £38.2million grant.

The scheme to develop the technology to meet vehicle manufacturer specifications is part of Innovate UK’s initiative to make the UK a global leader in emissions-cutting technology.

English firm Faradion and Scottish based AGM Batteries were awarded the funding to deliver a working prototype of its technology for electric vehicles (EVs) by 2018.

Read the article at http://www.bestmag.co.uk/industry-news/sodium-ion-firms-get-cash-boost-bring-technology-market

Permanent link to this article: http://batteriselskab.dk/nyheder/sodium-ion-firms-get-cash-boost-to-bring-technology-to-market.htm