Complementary analyses of aging in a commercial LiFePO4/graphite 26650 cell

In this work we investigate the electrode degradation mechanisms in a commercial 2.5 Ah LiFePO4/graphite 26650 cylindrical cell. Aged and fresh electrode samples were prepared by cycling two cells respectively five and 22 k times. Subsequently the cells were disassembled in a glovebox and the electrode samples were prepared for electrochemical testing in a 3-electrode setup, and for characterization with XRD, XPS and low-kV FIB/SEM tomography. A 1 μm thick CEI (cathode electrolyte interface) layer was observed at the electrode/electrolyte interface of the aged LiFePO4 electrode. Relative to the fresh LiFePO4electrode, the aged electrode exhibited a larger series resistance which indicates the observed degradation layer increases the ionic resistance. In addition, micron-sized agglomerates, probably a mixture of carbonaceous material and decomposition products from the electrolyte, were observed at the electrode/electrolyte interface of the aged graphiteelectrode. These layers may contribute significantly to the loss of lithium inventory (LLI) in the cell, and to the loss of active material (LAM) in the graphite electrode. Low-voltage FIB/SEM tomography was used to detect local charging effects of graphite particles in the carbon electrode, an effect of poor dissipation of the electric charge to the ground after the sample interaction with the electron beam. The charging effects were primarily observed in the aged electrode and most of the locally charged particles were found to be close to the electrode/electrolyte interface, indicating a poorly percolating graphite network near this interface. 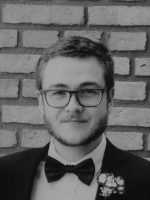 Roar Hestbek Nicolaisen graduated in December 2018 with a Cand. Scient. In Chemistry from Aarhus University.

His vision is to help provide this missing component, energy storage, that will make it economical to have a society driven entirely by renewable energy.

Permanent link to this article: http://batteriselskab.dk/artikel/videnskabelig/complementary-analyses-of-aging-in-a-commercial-lifepo4-graphite-26650-cell.htm