The high-tech patent wars have spread to a new front, engaging two of the world’s largest industrial companies in a multibillion-dollar court battle over lithium-ion batteries. At issue is a battery chemistry that, while little known to the public, many experts believe currently holds the best chance of electric cars penetrating the mass market.

The case pits Germany’s BASF, the world’s largest chemical company, against Belgium’s Umicore, one of the biggest makers of battery materials. Filed by BASF on Feb. 20, 2015 in US federal court in Delaware, the lawsuit – which has been reported only by patent blogs – accuses Umicore of selling a key battery component to which BASF holds an exclusive license. It also alleges that Umicore threatened to sue firms if they gave their business to the German company. The suit seeks billions of dollars in alleged damages. 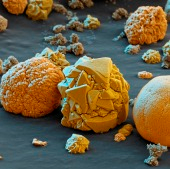 Scanning electron micrograph (colored by software) of the cathode particles produced by BASF.

Permanent link to this article: http://batteriselskab.dk/nyheder/industrial-battery-material-titans-in-lawsuit-over-nmc.htm