The Evolution of Battery Technology Infographic

Here, we demonstrate that the bismuth metalates, BiVO4 and Bi2(MoO4)3, as representatives of ternary metalates, can cope with these requirements. High specific capacities (367 mAh/g and 352 mAh/g, respectively), exceptionally high cycling stability for alloying anodes (up to 79% of the first charge capacity is retained over 1000 cycles at ∼1C for Bi2(MoO4)3), better high-rate performance compared to other Bi-based anodes, low environmental load (Bi has low toxicity for a heavy metal), and low manufacturing costs (e.g., BiVO4 is a commercial yellow pigment) make this novel class of anode materials suitable for large-scale electrical energy storage applications. Operando XANES, ex situ XRD, and DFT analysis suggest that the initial compounds are converted into alloying Bi nanocrystallites confined in a matrix of electrochemically active insertion hosts Na3+xVO4 and Na2+xMoO4, respectively. The Bi metalate phases are not reformed on charge, and on subsequent cycles the reaction with Bi metal and vanadate/molybdate phases gives rise to the reversible capacity. The nanostructured composite anode thus obtained has excellent high rate performance and retains its capacity over hundreds of cycles. 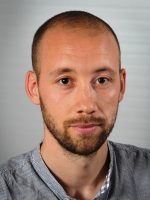 Jonas Sottmann is in the final phase of his PhD degree in Electrochemistry and operando synchrotron studies at the University of Oslo, Norway. He received a MSc in Physics from Université Claude Bernard Lyon, France and a BSc in Physics from Georg-August- University of Göttingen, Germany. In 2012 he started on his PhD project with the title “Synchrotron Based Operando Methods for Characterization of Non-Aqueous Electrode Materials”. He studied the structure property relations of various lithium- and sodium-ion battery electrode materials.

For that purpose he designed an X-ray transparent cell for combined X-ray diffraction and absorption spectroscopy measurements coupled with electrochemical characterization on the Swiss-Norwegian Beamlines at the European Synchrotron, France.

Permanent link to this article: http://batteriselskab.dk/artikel/bismuth-vanadate-and-molybdate-stable-alloying-anodes-for-sodium-ion-batteries.htm