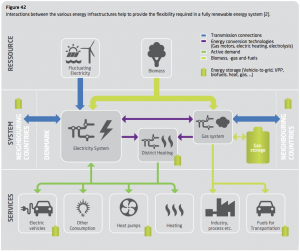 The report deals with global, regional and national perspectives on current and future energy issues. Each report is based on internationally-recognised scientific material and is fully referenced. Furthermore the reports are refereed by independent international experts.

One of the great challenges in the transition to a non-fossil energy system with a high share of fluctuating renewable energy sources such as solar and wind is to align consumption and production in an economically satisfactory manner. Energy storage could provide the necessary balancing power to make this possible. This energy report addresses energy storage from a broad perspective: It analyses smaller stores that can be used locally in for example heat storage in the individual home or vehicle, such as electric cars or hydrogen cars. The report also addresses decentralized storage as flywheels and batteries linked to decentralized energy systems. In addition it addresses large central storages as pumped hydro storage and compressed air energy storage and analyse this in connection with international transmission and trading over long distances. The report addresses electrical storage, thermal storage and other forms of energy storage, for example conversion of biomass to liquid fuel and conversion of solar energy directly into hydrogen, as well as storage in transmission, grid storage etc. Finally, the report covers research, innovation and the future prospects and addresses the societal challenges and benefits of the use of energy storage.

The reports summarizes a set of recommendations to stimulate development in energy storage technologies and their integration in energy systems that is worthwhile reading:

You can read the full report and view the attached presentations at dtu.dk

Permanent link to this article: http://batteriselskab.dk/rapporter/dtu-international-energy-report-2013.htm