Revealing the Nanoscale Secrets of Batteries

Will Tesla Gigafactory become a big game changer for the battery industry ?

Tesla’s battery factory gets a lot of attention. When completed, the so-called Gigafactory will manufacture more lithium-ion batteries each year than were produced globally in 2013.

That will help push prices further downward. But a few other large producers — LG Chem, Panasonic and Samsung — are already making batteries at unprecedented scale. There are numerous giga-scale factories producing cells and battery packs for electric cars and stationary applications throughout Asia. And the recent wave of capacity is already impacting pricing in a big way.

Tesla has officially opened its Gigafactory in the Nevada desert, after an investment of roughly $5 billion. The plant is only 14 percent complete at this stage, but when fully finished, it will be about 10 million square feet – or nearly the size of 174 NFL football fields, making it one of the largest buildings on the globe. 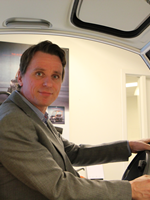 Rasmus Sass Bjørch joined Garia A/S in 2006. He has a mechanical background and was in the beginning designing chassis frame and wheel suspension. Rasmus found interest for batteries in the early years at Garia and started to learn and work with batteries.
He is now the responsible for the propulsion systems at Garia, including wire harness, batteries, motors, motor controllers, transmission etc.
Garia are designing, developing and manufacturing electric vehicles for golf, leisure and utility purpose.
Garia also does engineering services and are currently developing several deferent projects in the electric vehicle segment, such as cargo scooters, motorcycles and multi person vehicles.

Permanent link to this article: http://batteriselskab.dk/nyheder/will-tesla-gigafactory-become-a-big-game-changer-for-the-battery-industry.htm