Update from the Discussion Session on material testing

On 19 October 2015, Haldor Topsøe A/S hosted a discussion session on material testing. The intention was to discuss and align testing methods between companies and research institutions in Denmark and develop a common best practice.

Around 20 people from universities and companies attended the meeting and presentations from five speakers on coating, coin cells, pouch cells and in-situ cells formed the basis for the lively discussions. Due to the many questions and discussions, the meeting ended two hours later than initially planned. Both organizers and participants agreed that the event was a great succes.

For those of you who missed out on the opportunity, a similar discussion session will be held in Uppsala University on 30 November 2015 from 9 am to 17 pm. More info and registration at josh.thomas@kemi.uu.se. 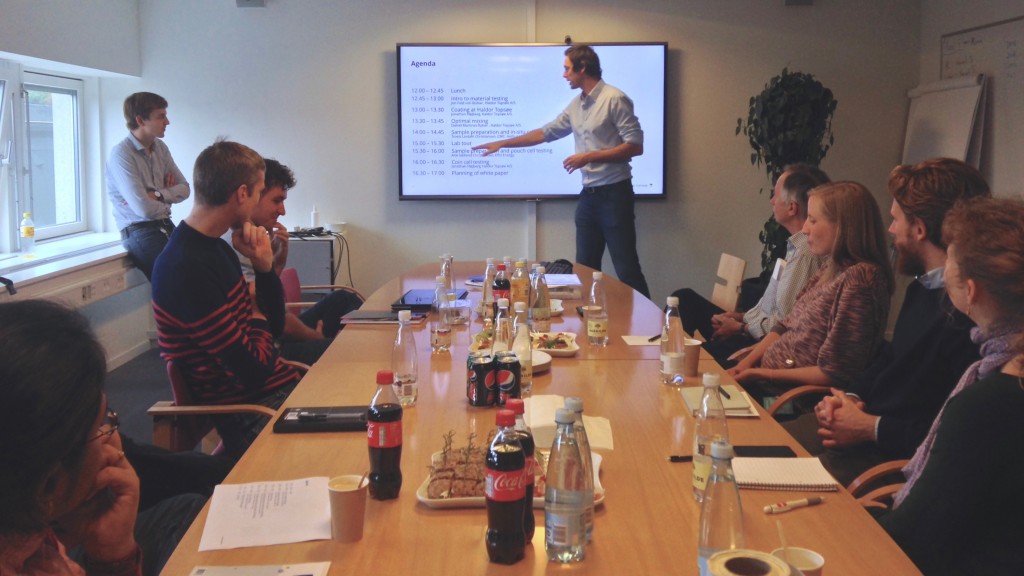 Jonathan Højberg received his Cand. Polyt. in Physics and Nanotechnology from the Technical University of Denmark (DTU) in 2011 with a specialization within atomic scale physics related to sustainable energy solutions.

He is currently pursuing a PhD within the field of Lithium-air batteries in a collaboration between DTU Energy Conversion and Haldor Topsøe A/S. He has been heavily engaged in building up state-of-the-art test facilities for Lithium-air batteries at both places and deciding which experiments to conduct.

Jonathan is highly motivated by the interplay between universities and industry, and how the synergies can accelerate the development of new and sustainable energy technologies. In 2009 he founded a company to leverage a newly developed technology to harvest ocean wave energy. The proof-of-concept was developed by making bachelor projects and courses for 15 students at DTU with different competences and coordinating this work. The work resulted in a top-3 in the national start-up competition Venture Cup in the cleantech category and the ideas were adapted in a national collaboration granted 48 MDKK by the Advanced Technology Foundation in 2011 to further develop the technology.

Besides ocean wave power and batteries, Jonathan has worked extensively with the development of cathode materials for Solid Oxide Fuel Cells at the Fuel Cells and Solid State Chemistry Division at Risø, DTU (now part of DTU Energy Conversion). The work focussed on building electrochemical models to describe the cathode, and identify and optimize the most important parameters.

Permanent link to this article: http://batteriselskab.dk/arrangementer/update-from-the-discussion-session-on-material-testing.htm