Board members of the Danish Battery Society reelected

Based on the overlap between production of heterogeneous catalysts and battery materials Haldor Topsøe is looking at developing and producing competitive battery materials. Recently Haldor Topsøe has decided to move into Na-ion technology by investing in and collaborating with the British start-up Faradion on maturing this technology, which has some cost advantages over Li-ion that will be discussed in the presentation. A short status of other battery activities at Haldor Topsøe will also be presented.

Check out the presentation here 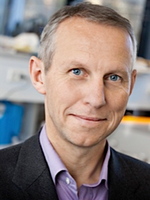 Søren Dahl is the project manager for Battery Materials R&D at Haldor Topsøe A/S. He received his PhD in surface science studies of ammonia synthesis in 1999 at the Technical University of DK. He then worked for 10 years with various aspects of catalyst R&D at Haldor Topsøe. In 2009 became professor at the Technical University of Denmark in connection with the research initiative “Catalysis for Sustainable Energy” for which he was director until he rejoined Haldor Topsøe in 2012.

Permanent link to this article: http://batteriselskab.dk/arrangementer/praesentationer/status-of-battery-materials-at-haldor-topsoe.htm