Further elaboration on the equivalent circuits for EIS measurements and how they are linked to the chemical processes. Johan also explained some of the pitfalls of using equivalent circuits to model the impedance response, as it is always possible to construct an equivalent circuit with the right output characteristics, but that might not be a physically correct representation of your measured system. 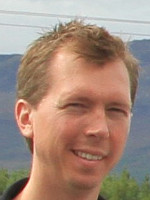 Johan Hjelm is working as a Senior Researcher in the Section for Applied Electrochemistry of the the Department of Energy Conversion and Storage (DTU Energy Conversion) at the Technical University of Denmark (DTU).

He studied chemistry and mathematics at the University of Uppsala, Sweden, where he got his M.Sc. in 1998. He finished his Ph.D. at the Department of Physical Chemistry at Uppsala University in 2003, and then went on to do his postdoctoral research at Dublin City University, Ireland. He was employed as a Senior Researcher at Department for Fuel Cells and Solid State Chemistry, Risø National Laboratory (now DTU Energy Conversion) in 2006.

Johan has been heavily involved in the construction and running of the new fuel cell test facility at the department, and has since 2010 been running two projects focusing on Solid Oxide Fuel Cell durability, robustness, and electrode development, funded by the Danish Grid Operator (Energinet.dk). He is currently also involved in research on alkali metal – air batteries within the ReLiable project (work package leader for ) and aspects of Li ion battery electrochemistry and durability within the ALPBES project, both funded by the Danish Strategic Research Council.

Permanent link to this article: http://batteriselskab.dk/arrangementer/praesentationer/chemical-processes-their-equivalent-circuits-and-common-pitfalls.htm